The great transpersonal psychologist Stan Grof – a key founder of LSD psychotherapy, among other achievements – wrote a lot about “knots” – the binds and tangles that make up so much of our everyday human minds.   I first encountered this metaphor in the mid-1970s in R.D. Laing's book Knots, which goes over the various psychological and interpersonal knots that people tie themselves in, in the form of funny little poem-anecdotes, e.g. 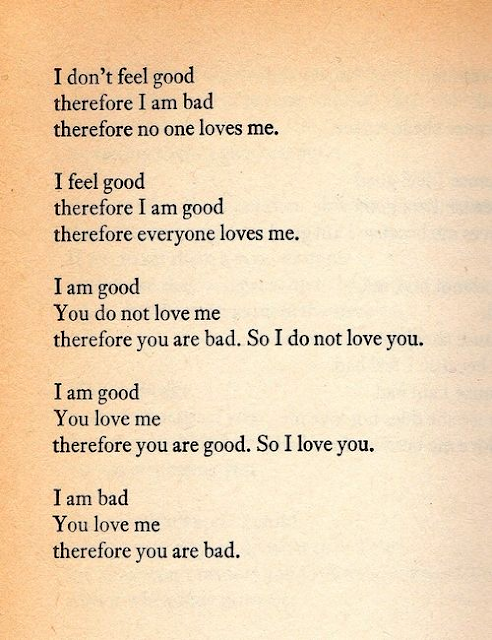 Indian philosophy contains some similar ideas.  There is a concept I have read referred to somewhere or other as “crumpled versus uncrumpled self.”  The uncrumpled self is unfolded and unfettered, existing beyond this spacetime continuum.  The crumpled self (the “samsari-jiva”, the aspect of the soul embedded in Samsara) is the one existing in our physical world – with all the aspects of the uncrumpled self there somewhere “deep inside”, but sometimes appearing in a distorted form, and not always able to display all their properties or show their full beauty (to the aspects of other selves localized in Samsara, at any rate). 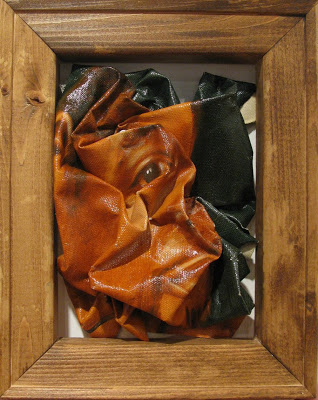 I have no idea what Kaphar had in mind when creating this wonderful painting.  But among many other things, it's a metaphor for the way the higher self is crumpled up when it gets projected into our everyday reality.   Just as the familiar visual image of self got crumpled to make this painting, so the higher self gets crumpled to make the self as we perceive it in our ordinary waking consciousness and 4D spacetime continuum.


Knot theory is a fascinating branch of mathematics, but the knots Grof and Laing referred to aren't quite the same as standard mathematical knots.   But still, the parallels are real. 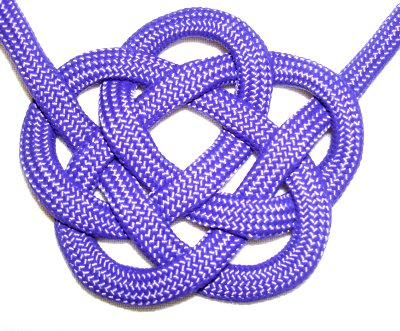 One intriguing fact about standard mathematical knots is that you can only tie them in 3 dimensions.  If you have a 1D piece of string in 4 dimensions, there's no way to tie it in a knot.  Every would-be knot in 4 or more dimensions could be “unraveled” just by bending it around and smoothing out its kinks.   On the other hand, a string lying flat on a table, with no overlaps, may make a funky pattern, but it's not going to form a knot. 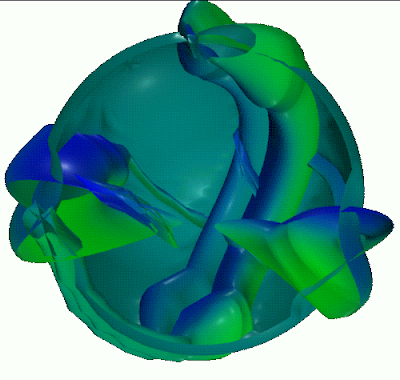 
Conceptually, it seems that knots emerge when you embed a structure in a higher-dimensional structure – but the dimension isn't quite high enough for it to flow freely and just snake around however it feels like.   The dimensional restriction has to be strict enough that one movement that part of it makes, restricts another part of it from making some other sort of movement.

A property of knots that appealed intuitively to Grof and Laing is, obviously, that the harder you pull on a knot, the tighter it gets.   It's pretty easy to make a knot tighter, but making a knot looser involves a lot more work – understanding the knot and exerting force in appropriate places.  Or else just embedding the whole knot in a higher-dimensional space, at which point it can be unraveled by moves within the extra dimensions.

I think a more general version of mathematical knottitude is interesting to think about.   The core “philosophical” crux of a knot, I think, is: It's a set of relationships among N elements so that


These two criteria seem to sum up the qualitative properties that made Grof and Laing call certain psychological and social phenomena “knots.”   A knot is a bunch of relationships (between people, or between thoughts, or whatever) that are tangled up in such a way that it's easy to make the whole thing tighter, but not easy to get the whole thing looser.   Let us call any system of entities and relationships satisfying these criteria a “metaphorical knot.”

Standard mathematical knots have these two properties (where the “relationships” are e.g. the elementary topological forms in the knot, as described by knot theory), but there are lots of other mathematical structures that also have these properties, and would thus qualify as metaphorical knots.

Suppose that the tendency to take habits (morphic resonance) works like: Each observation of some relationship, actually counts as (1 + epsilon) bits of evidence, because we have a prior assumption that patterns tend to continue.

So what we see is: Morphic resonance makes it easier to “bootstrap” relationships out of noise; and then it causes observations of already-established phenomena to make less difference, because they're already so certain anyway.

To see how this plays out in the context of psychological (metaphorical) knots, consider a very simple example of a psychological knot:

Human emotions being what they are, this interpersonal emotional dynamic is going to be a bit nonlinear.   That is, typically, small instances of apparently hateful behavior will be overlooked by most people.   But then once the amount of hatefulness emanating from a person crosses a certain threshold, this isn't the case anymore – anger occurs in the mind of the recipient of the hatefulness, and the hateful person has become an “enemy.”   So the mutual-hatred metaphorical-knot is a positive-feedback relationship, and among normal people it doesn't occur that often because the level of hatefulness is generally low.  But if someone starts to be hateful above a certain threshold level, then the odds of a mutual-hatefulness dynamic getting started are reasonably high.

What morphic resonance does here is to make it more likely for such a loop to get started, via bootstrapping things relatively quickly into the domain where both people hate each other a lot.  It causes a few instances of hatred to get over-counted, and to cause a general phenomenon of mutual hatred to exist.  But then once this general phenomenon exists, the dynamic of people acting hateful to those who hate them kicks in, and there is so much hatefulness going on that it's going to be hard to stop.

The Origin and Maintenance of Life


A very similar phenomenon may have occurred long ago to trigger the origin of life.   Proto-life is hypothesized to have involved “autocatalytic sets”, i.e. sets of chemicals that mutually catalyze their  relationships with each other.  E.g., schematically, we may have


Real cases are generally more complicated than this, but with a similar sort of structure.   Autocatalytic sets are complex nonlinear dynamics, which can flourish in the right substrate (e.g. an appropriately constituted “primordial soup”).   But it's often finicky to get one started.   As Rupert Sheldrake has pointed out, morphic resonance potentially can help here, via taking chemical relationships that have occurred now and then by chance, and increasing the odds that they occur again.  Then once the network of relationships is prominent enough, the nonlinear dynamics takes over. 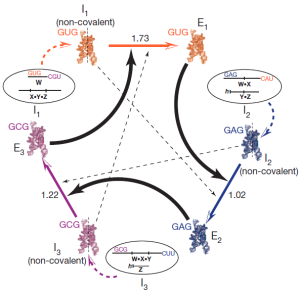 An example of a 3-member autocatalytic set as produced in the Lehman lab. Each of the three covalent RNA molecules (E1, E2, and E3) catalyzes the production of the next one (black arrows).
http://www.coolscience.club/research/experimental/

A vision of the origin of life as driven by a series of increasingly complex autocatalytic sets.  From “Coenzyme Autocatalytic Network on the Surface of Oil Microspheres as a Model for the Origin of Life” by Alexei A. Sharov,
http://www.mdpi.com/1422-0067/10/4/1838


Full-featured life-forms like amoebas, trees and humans may also be viewed as highly complex nonlinear-dynamical systems.   They contain many metaphorical knots internally, of various kinds on various levels, but they are too complex to be simply considered as “knots” themselves.   Like most human minds, they consist of many different knots linked together in various ways.   Some of the relationships involved in knots may themselves be viewed as knots of sub-relationships, or complex networks formed by linking together various knots of sub-relationships, etc.

Spacetime as a Metaphorical Knot?


It may even be possible to view spacetime itself as a kind of knot.  Once a time-axis is identified and emphasized as important, spatial relationships may begin to accrete around it.   Once a network of spatial relationsihps is identified and emphasized as important, the associated events will tend to fall into a global temporal order.   Space reinforces time, time reinforces space.  Morphic dynamics may bootstrap this process. 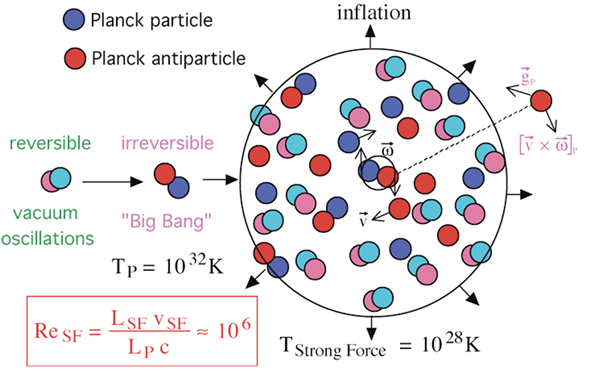 Some physicists model the emergence of the early universe from the Big Bang as, loosely speaking, a kind of “autocatalysis” process... from
Gibson, C.H., 2005. The first turbulent combustion. Combust. Sci. Tech., 177: 1-25.
http://www.vision-in-cichlids.com/synergetic_evolution.htm

This may sound strange, yet bears close resemblance to various theories of the crystallization of the physical universe after the Big Bang, that are thrown around in the physics community in the last few decades.  The difference is that here we are talking about the emergence of spacetime within a broader eurycosmic space which is conceived as not quite physical in the ordinary sense.  But exploration of what this difference means is ongoing and many things are unclear.  I will return to this physics connection in a later chapter.


Grof and Laing, as therapists, were interested in helping people to untie some of the knots in their minds.   According to the conception of metaphorical knots presented above, this requires some major transformations.  Just weakening the relationships in a knot little by little won't do it.  You have to effect some larger transformation, that by changing the context in the person's mind and/or life will somehow get rid of all the relationships in the knot at once.  (As Grof found, an acid trip can do that, sometimes, especially under the proper guidance.   But there are many other routes as well.)

How does a mind with its psychological knots weakened relate to the notion of the “uncrumpled self”?   Here, finally, we return to our beloved eurycosm.   One hypothesis would be that metaphorical knot type dynamics are so strong in the ordinary person's mind, that they drown out alternative dynamics involving linkages between the portion of a person's mind embedded in this spacetime continuum, and the portion of that person's mind located elsewhere in the eurycosm.   With the typical psychological knots weakened, then different nonlinear dynamics can emerge, based on interactions between the eurycosm and our spacetime continuum.

With enough interactivity between the portion of a person's mind here in this spacetime, and the remainder of that person's mind out there in the eurycosm, one has a case where crumpled and uncrumpled mind are best viewed as aspects of the same dynamical whole.  Once this sort of dynamic is in place in an individual human's mind, it is generally also quite persistent.   But empirically, getting to this sort of state seems quite difficult.  There are a lot of habits to be de-habituated.

And, complicating the matter further is that the near eurycosm appears to contain portions of individual human's minds that are “crumpled” in their own way – i.e. in the various paranormal experiences reported involving human minds outside our spacetime continuum, not all involve “enlightened”, well-balanced eurycosmic mind-fragments.   From the available evidence, it would seem that psychological knots can survive and flourish in the near eurycosm as well.  Indian philosophy and other cultures' wisdom traditions have a lot to say on this topic, but much of it is quite confusing from a modern perspective.  There's a lot to be sorted out.  I'd love to see humanity put more energy into exploring such issues rather than, for example, blowing each other up or marketing ever more expensive analog timepieces....
Posted by Ben Goertzel